Further to my post below on the wonderful book Brooklyn being made into a movie, I can tell you it’s terrific!  If you’re looking for a family film over the holidays, this one is a winner.  Here’s a video clip about the film you may enjoy:

I went with some women from my personal book club, and now we are re-reading the book for this month’s selection. 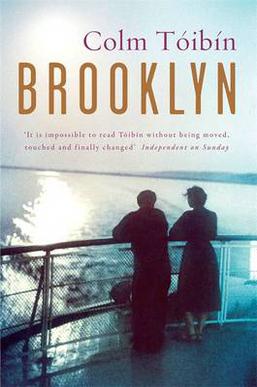 Julianne Moore is one of my favorite actresses, ever since I saw her amazing performance in the film version of The End of the Affair, which just happens to be the February selection for Literary Masters book groups and literary salons.  Now she has starred–and scooped up a Golden Globe Award for best actress–in the film version of Game Change, a non-fiction book by John Heilemann and Mark Halperin.

I watched the movie first and was so gob-smacked at the story, I rushed out to the library to grab the book.  The book is much more comprehensive than the film.  The movie centers around Sarah Palin, after she is tapped by John McCain to be his vice-president, and the campaign for the presidency from that ‘game-changing’ moment until the election.  The film is thoroughly compelling and utterly fascinating.  My jaw was on the floor for most of it.  Yes, I was very aware of the story; this wasn’t news to me, as I tend to follow presidential elections with some interest.  But this was inside the story, and honestly, I don’t know how much of it was true, but if only half of it was, NO ONE comes out of it looking good.

The book is more about the campaigning for the Democratic nomination, so it covers the campaigns of Hillary Clinton and Barack Obama much more–in fact, maybe too much unless you like following politics and elections.  This is not to put you off reading it–it bogs down just a little–and each time it does, it quickly picks up and swiftly carries you along another storyline which you will not be able to put down–the John Edwards campaign, for example, or the problems that former president Bill Clinton posed for Hillary, or, of course, the main train wreck, Sarah Palin and the implosion of John McCain’s campaign.  This is seriously frightening stuff.  You know how they say, if you like to eat sausages, don’t look at how they are made?  Well, if you want to trust in your politicians, don’t look at how a campaign is run, or how an election is won.  Sausage-making looks yummy in comparison.