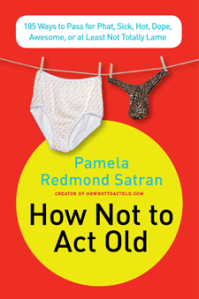 This book is hilarious! A friend gave it to me recently (hmm…was she hinting at something?) and I have been laughing ever since. Comprised of 185 tips on how not to act old, this little gem was written precisely with me in mind, I am sure. Its aim is for anyone over the advanced and senile age of 40, but I swear, it really was written just for me.

Take, for instance, tip #52: don’t yell into your cell phone. How many times have my children accused me of doing just that? Well, every time I’m on my cell phone, actually. And what about tip #32: don’t be proud of being befuddled by technology. Right, I’m going to stop referring to myself as a luddite immediately. Just using the word “luddite” is probably old.

As I was gobbling down each tip as if it were a rejuvenating vitamin sure to reverse the decay and decline that has already set in, I kept thinking, yes, that’s true, that’s right, that’s exactly how it is. I must be old!

Satran has a razor sharp eye and wit to go with it, and I thoroughly enjoyed her book. She also has a blog–from which the book was launched–you can access it at www.hownottoactold.com. You can access it? I’m sure there’s a younger way to say that.