Six novels have made the short list cut for the prestigious Man Booker Award. Here’s the link if you would like to know more:

I am bummed that The Thousand Autumns of Jacob de Zoet, our :Literary Masters book groups choice for May, didn’t make the list. I do have one of the short listed books sitting on my ‘To Be Read’ shelf: Parrot and Olivier in America by Peter Carey. He’s already won the prize twice, so there’s a lot of hoopla about whether he can pull a hat trick. I’m not a big fan of his, which is one of the reasons I haven’t yet read this latest one. Perhaps I’ll give it a go soon.

Room, which I blogged about a couple of posts below (but you knew that, right?) made the cut and is apparently one of the favorites. I still don’t want to read it.

The Long Song by Andrea Levy made the list. Now I read this book recently and really enjoyed it. It’s a story told by a Jamaican slave and her voice is humorous, touching, and incredibly unique. I’ve been thinking about using this book for the month of February’s Literary Masters book groups. Hmmm…

The winner of the prize will be announced October 12th. Until then, we can all hold our breath. How about you? Have you read any of the books on the short list?

I’m suffering from insomnia at the moment, so I just finished reading a couple of good articles online. One is in the NY Times and suggests that the growth in popularity of e-books is going to be for bookstores what the meteorite was for the dinosaurs. It got me thinking…without bookstores, readers won’t be able to browse around the store’s shelves to find books. They will rely more heavily on the reviews of professional readers, such as…hmm, let me see, oh, hello! Can I be of assistance?

The other article was in the Guardian. It discussed the novel Room by Emma Donoghue, which has been long-listed for the Man Booker prize. Evidently the book is about a five year old boy and his mother who are held captive in a room–for years. There is a man who comes in the dark to bring necessities–and to take his own–but that’s the only contact, save for the television, that the mother and son have with the outside world.

I read about this book when the long list was announced, and thought yuck, I don’t want to read that. However, this article:

makes it sound very interesting and rather worthwhile. Donoghue certainly is articulate when discussing her novel. She defends herself from the accusation that she is sensationalizing and exploiting the true-life horror story of Franz Fritzl, the Austrian who kept his daughter in a room for decades and fathered seven children by her. You’ve heard about him, right?

This book may have been “triggered” (Donoghue’s word) by that incident, but it is not about that. The author discusses how it is about the parent/ child relationship and the love that can withstand, and transcend, the ordinary–and the strange. She says, “Really, everything in Room is just a defamiliarisation of ordinary parenthood…The idea was to focus on the primal drama of parenthood: the way from moment to moment you swing from comforter to tormentor, just as kids simultaneously light up our lives and drive us nuts. I was trying to capture that strange, bipolar quality of parenthood. For all that being a parent is normal statistically, it’s not normal psychologically. It produces some of the most extreme emotions you’ll ever have.” She goes on to say ” I wanted to focus on how a woman could create normal love in a box.” 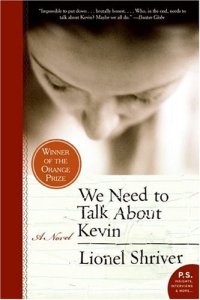 The author of the Guardian article, Sarah Crown, goes on to contrast Room with another novel that won the Orange Prize and that was “sparked” (Crown’s word) by another real life tragedy–the Columbine shootings–We Need to Talk About Kevin by Lionel Shriver. Crown points out that in Shriver’s novel “a mother and her son create hell in the heart of a middle-class idyll,” while in Room, “Ma and Jack conjure humdrum beauty out of a kind of hell.”

Hmm, although I know both these novels have received high praise from critics and the lay reader alike, I just don’t think I want to spend my limited time with them. What about you? Have you read these books? Do you want to?